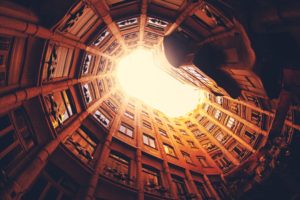 Light therapy, sometimes called phototherapy or photo-biomodulation, be it red, near infrared, white, or blue, has been shown to be useful for maintaining health and well being (1;2;3).  It is also a useful tool in recovering from several different conditions, including erectile dysfunction/low testosterone. The mechanism by which near infrared light works is based in its ability to increase energy production in cells while increasing blood flow.  It activates cytochrome c oxidase (Cox), which absorbs 35% more red light.  Cox is a respiratory enzyme in cellular mitochondria.   Cox is produced during the last step of mitochondrial energy production.  Here mitochondrial membrane electrons and protons turn an oxygen (O2) molecule into two water (H2O) molecules (4;5).  This exertion also produces adenosine triphosphate (ATP) forming energy (4;6).   This is the energy formed within cells necessary for all living tissue to survive and engage in physiological processes. During this process ATP production can be inhibited by the displacement of O2 by nitric oxide (NO).  This is a potential problem as NO is healthy in small doses, but when it binds to Cox it inhibits mitochondrial respiration.  Near infrared light photo-dissociates, or cleaves, NO from Cox (freeing it from the mitochondria) which facilitates blood flow (6).  In short, the elimination of nitric oxide from mitochondria is thought to be the reason that red light therapy improves mitochondrial respiration (6;7).  Besides increasing ATP production, red light increases production of the following: reactive oxygen species (which in small amounts is helpful for healing etc.), intra-cellular calcium, and the release of nitric oxide.  Activation of such transcription factors then lead to expression of the following: many protective, anti-apoptotic or cell killing factors; anti-oxidants; and pro-proliferation gene products (8).

Injured tissues release more nitric oxide, which binds to cytochrome c oxidase (Cox), which absorbs red light at greater intensity.  When NO bids to Cox It disrupts mitochondrial respiration, or the production of ATP.  This slows down cellular regeneration.  Near infrared light photo-dissociates NO from Cox, allowing No to go back into circulation.  This increases blood flow at the same time it allows for faster production of ATP in the injured cells, and thus faster tissue repair (4;6).

Mechanism by which blue light works: blue light in the wavelength range of 405-470 nm has an antimicrobial effect.  The benefit of blue light is that it works without causing additional changes to the cells being targeted or other, adjacent, cells or molecules within the cells, which can cause a chemical change in other molecules, these are called exogenous photosensitizers. microbial cells are sensitive to blue light, which has an antimicrobial effect, so it can heal wounds.  It can affect cell to cell communication via changes to blue light sensitive receptors in bacteria.  It can inhibit biofilm formation. When blue light has a higher radiant exposure, it exhibits a broad spectrum antimicrobial effect against bacteria (Gram-positive and Gram-negative types).  Blue light has been used successfully to treat H. pylori, oral bacteria, P ache, by forcing the cells to produce free radicals or cytotoxic reactive oxygen species (3) via the photo excitation of intracellular compounds called porphyrins.  Blue light has successfully treated Helicobacter pylori infections of the stomach, pathogenic bacteria like Staphylocoocus aureus and Pseudomonas aeruginosa.  It is less harmful to human cells than ultraviolet light (3).

Mechanism by which bright white or natural light works: it regulates melatonin levels by signalling the pineal gland to make more or less depending on the amount of light the gland is exposed too.  white light can also improve vitamin D synthesis.  Further, natural light has red light in it.  In bright daylight the near infrared spectrum, which penetrates tissue by up to 2-3 cm, may dissociate NO, promoting mitochondrial respiration (4). It has all of the other wavelengths in it, so it may have a similar, thought weaker, effect compared to stronger, artificial, light.

Testosterone, red light, sunlight, and white light. This is important as up to 25% of men over age 40 report sexual problems.  Vitamin D production can be improved with light therapy (46).  Low levels of vitamin D have been associated with lower levels of testosterone in both animals and humans (Mdmag).

Further, a lack of adequate vitamin D levels (improved with light therapy) has been found to negatively affect sexual desire (in women) (70).  This may partially be due to vitamin D’s effect on blood flow, including that in the sex organs. Here vitamin D receptors in blood vessels respond to the vitamin by being more elastic, by working better (71).  If your sex organs are not getting enough blood they will not work optimally.  Sex drive is also based in hormonal health.  If your reproductive hormones, necessary for sexual desire, are out of balance it can cause low libido or sex drive.  Vitamin D is implicit in the production of testosterone and estrogen (64).

In a human trial, white light like that used for seasonal affective disorder (SAD) was used to increase testosterone levels and subsequently greater satisfaction sexually.  In the study 39 men, who had been diagnosed with hypoactive sexual arousal disorder or sexual desire disorder (lack of interest in sex) were randomly assigned to either an active light box condition or a much weaker light box condition.  The men had their testosterone levels measured as well as their baseline interest in sex. Before starting treatment, the groups averaged a score of 2/10 for sexual satisfaction. The average testosterone measurement was 2.1 ng/ml (average test group) to 2.3 ng/ml (average for control group). Both groups received early morning (30 minutes of exposure) treatment per day for two weeks.   After treatment the active light group saw their sexual satisfaction scores treble, to 6.3.  their testosterone went up to 3.6 ng/ml.   In comparison, the weak light (control) group had a slight increase in sexual satisfaction scores to 2.7.  Their testosterone levels remained at 2.3 ng/ml.

Light may encourage greater testosterone production because light therapy can inhibit the pineal gland (found in the centre of the brain), which then allows for greater testosterone production.  This mimics light’s effect on reproduction in the spring and summer, when testosterone in males, including animals, increases (10).  This is echoed by animal studies (11).  Photo-stimulation has been shown to increase both testosterone secretion and testicular activity in animals, as well as serum levels of follicle stimulating hormone(FSH) which acts on the Sertoli cells of the testes to stimulate sperm production in males and luteinizing hormone (LH) which stimulates Leydig cell production of testosterone, Leydig cells act synergistically with FSH. It also improved testicular 17B-hydroxysteroid dehydrogenase (17B-HSD) activity, this enzyme helps convert hormone DHEA and steroid hormone androstenedione to testosterone. Similarly, low sperm motility (asthenospermia) may be treated with Low level laser therapy (LLLT). It has been shown in lab tests (in petri dishes) to increase sperm motility by up to 85%, while showing no damage to DNA (12).

Erectile dysfunction: can be improved by red light/infrared light therapy.  This is because red/infrared light improves blood circulation and vascular dealation, allowing greater blood flow to the penis.  Red light can also improve production of nitric oxide (NO) and carbon dioxide (CO2), which are vasodilators, so these help with blood vessel dealation. If overly abundant NO disrupts cellular respiration and energy production by binding to respiratory enzymes in mitochondria, stopping them from using oxygen and producing energy.  Red light photo-dissociates NO from the process of cellular energy production, allowing cells to produce optimum energy, including in the penis.  Further, NO production in the penis leads, via interactions with guanylyl cyclase, to increased production of the substance cyclic guanosine monophosphate (cGMP) which is what causes the smooth muscle to relax, leading to increased blood flow, and erection, in the penis (80). Red-light also helps improve testosterone, which in necessary to get and sustain and erection.  Thyroid hormones also stimulate testicular functioning and the production of testosterone. (81).

In a small (39 men) human trial volunteers were either assigned to a placebo treatment or to laser light therapy. The latter involved two twenty-minute treatments per week, for six to eight weeks, with an 808 nm GaA1As laser light specially designed with two rows of five lights (150 nm).  The median erectile function score for the treatment group improved from 13.5 to 20, in comparison the placebo/control group score went from 14 to 12.  After four or five treatments, many subjects in the light group reported experiencing morning erections (79).

Further, light therapy can positively impact or treat thyroid problems.  Thyroid problems can be a cause of erectile dysfunction and treatment of it can help restore erectile functioning (82).

Please not, this information is for educational purposes only. Please contact a qualified healthcare provider if you have any health, or other, issues.

For references go to:  http://lifeisbeautifullifecoach.com/light-therapy-an-overview/

Theme by Anders Noren — Up ↑